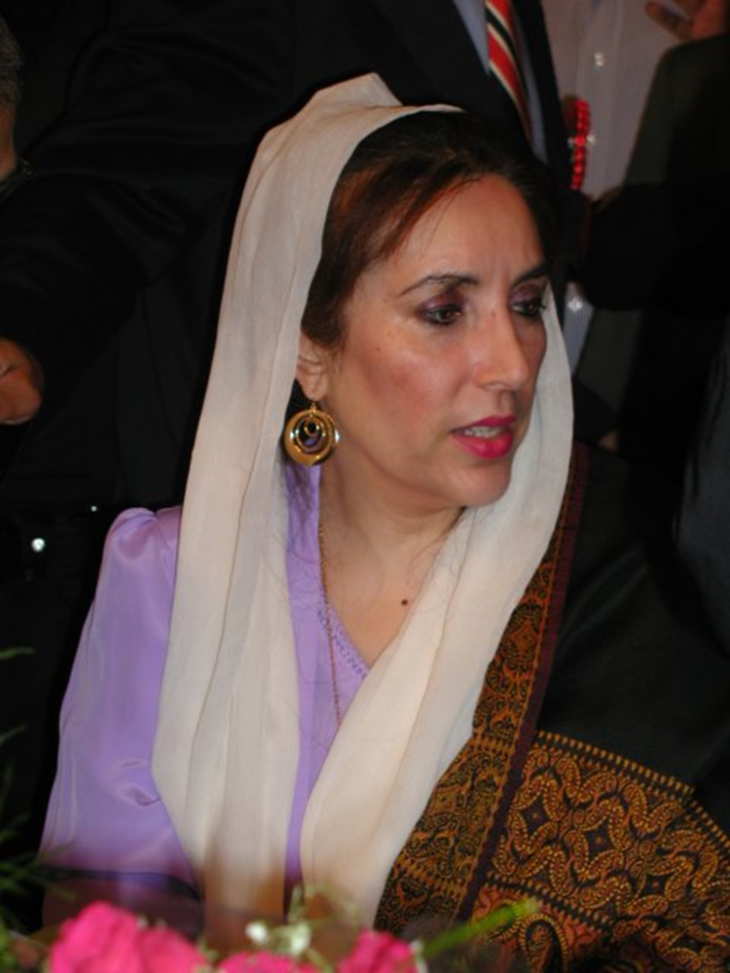 Benazir Bhutto (Sindhi: بينظير ڀُٽو‎; Urdu: بینظِیر بُھٹّو‎; Urdu pronunciation: [beːnəˈziːr ˈbʱʊʈ.ʈoː]; 21 June 1953 – 27 December 2007) was a Pakistani politician who served as Prime Minister of Pakistan from 1988 to 1990 and again from 1993 to 1996. She was the first woman to head a democratic government in a Muslim majority nation. Ideologically a liberal and a secularist, she chaired or co-chaired the Pakistan Peoples Party (PPP) from the early 1980s until her assassination in 2007.

Of mixed Sindhi and Kurdish parentage, Bhutto was born in Karachi to a politically important, wealthy aristocratic family. She studied at Harvard University and the University of Oxford, where she was President of the Oxford Union. Her father, the PPP leader Zulfikar Bhutto, was elected Prime Minister on a socialist platform in 1973. She returned to Pakistan in 1977, shortly before her father was ousted in a military coup and executed. Bhutto and her mother Nusrat took control of the PPP and led the country’s Movement for the Restoration of Democracy; Bhutto was repeatedly imprisoned by Muhammad Zia-ul-Haq‘s military government and then exiled to Britain in 1984. She returned in 1986 and—influenced by Thatcherite economics—transformed the PPP’s platform from a socialist to a liberal one, before leading it to victory in the 1988 election. As Prime Minister, her attempts at reform were stifled by conservative and Islamist forces, including President Ghulam Ishaq Khan and the powerful military. Her administration was accused of corruption and nepotism and dismissed by Khan in 1990. Intelligence services rigged that year’s election to ensure a victory for the conservative Islamic Democratic Alliance (IJI), at which Bhutto became Leader of the Opposition.

After the IJI government of Prime Minister Nawaz Sharif was also dismissed on corruption charges, Bhutto led the PPP to victory in the 1993 elections. Her second term oversaw economic privatization and attempts to advance women’s rights. Her government was damaged by several controversies, including the assassination of her brother Murtaza, a failed 1995 coup d’état, and a further bribery scandal involving her and her husband Asif Ali Zardari; in response to the latter, President Farooq Leghari dismissed her government. The PPP lost the 1997 election and in 1998 she went into self-exile in Dubai. A widening corruption inquiry culminated in a 2003 conviction in a Swiss court. Following United States-brokered negotiations with President Pervez Musharraf, she returned to Pakistan in 2007 to compete in the 2008 elections; her platform emphasized civilian oversight of the military and opposition to growing Islamist violence. After a political rally in Rawalpindi, she was assassinated. The Salafi jihadi group al-Qaeda claimed responsibility, although the involvement of the Pakistani Taliban and rogue elements of the intelligence services was widely suspected. She was buried at her family mausoleum in Garhi Khuda Baksh.

Bhutto was a controversial figure. She was often criticized as being politically inexperienced, was accused of being corrupt, and faced much opposition from Pakistan’s Islamist lobby for her secularist and modernizing agenda. In the early years of her career she was nevertheless domestically popular and also attracted support from Western nations, for whom she was a champion of democracy. Posthumously, she came to be regarded as an icon for women’s rights due to her political success in a male-dominated society.