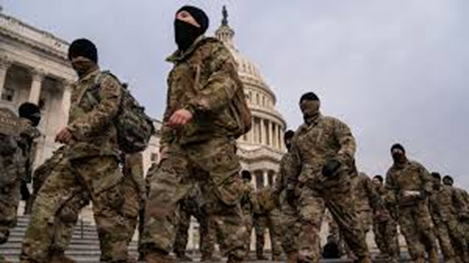 In the idea to reunited and heal the nation, the Washington D.C. capitol is on war footing in anticipation of domestic terrorist wanting to disrupt the Presidential Inauguration. Although there is reported intel that there may be hostile people protesting the swearing in of Joseph Robinette Biden Senior to the 46th USA Presidency, there is a mounting display of military personnel that is surely a sign of taking over a nation is flux.

The nation leaders are saying the we are turning the corner on an unfavorable past, but brining in the army to keep people in line is once again not listening to those who feel disenfranchised. The 1960’s was filled with bringing in the military to arrest the disenfranchised.

This is a place where Peace Panthers requires a strong showing. In the 1960’s the hippies understood that giving peace a chance went a long way. No nation has raised justification to attack and in order to justify the military we have brought them home to defend ourselves from ourselves.