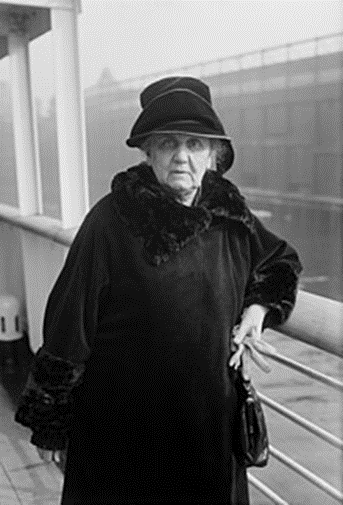 Jane Addams (born September 6, 1860 – May 28, 1935) was an American settlement activist, reformer, social worker, sociologist, public administrator and author. She was an important leader in the history of social work and women’s suffrage in the United States and advocated for world peace. She co-founded Chicago’s Hull House, one of America’s most famous settlement houses. In 1910, Addams was awarded an honorary master of arts degree from Yale University, becoming the first woman to receive an honorary degree from the school. In 1920, she was a co-founder for the American Civil Liberties Union (ACLU).

In the Progressive Era, when presidents such as Theodore Roosevelt and Woodrow Wilson identified themselves as reformers and social activists, Addams was one of the most prominent reformers.  She helped America address and focus on issues that were of concern to mothers, such as the needs of children, local public health, and world peace. In her essay “Utilization of Women in City Government,” Addams noted the connection between the workings of government and the household, stating that many departments of government, such as sanitation and the schooling of children, could be traced back to traditional women’s roles in the private sphere. Thus, these were matters of which women would have more knowledge than men, so women needed the vote to best voice their opinions.  She said that if women were to be responsible for cleaning up their communities and making them better places to live, they needed to be able to vote to do so effectively. Addams became a role model for middle-class women who volunteered to uplift their communities.